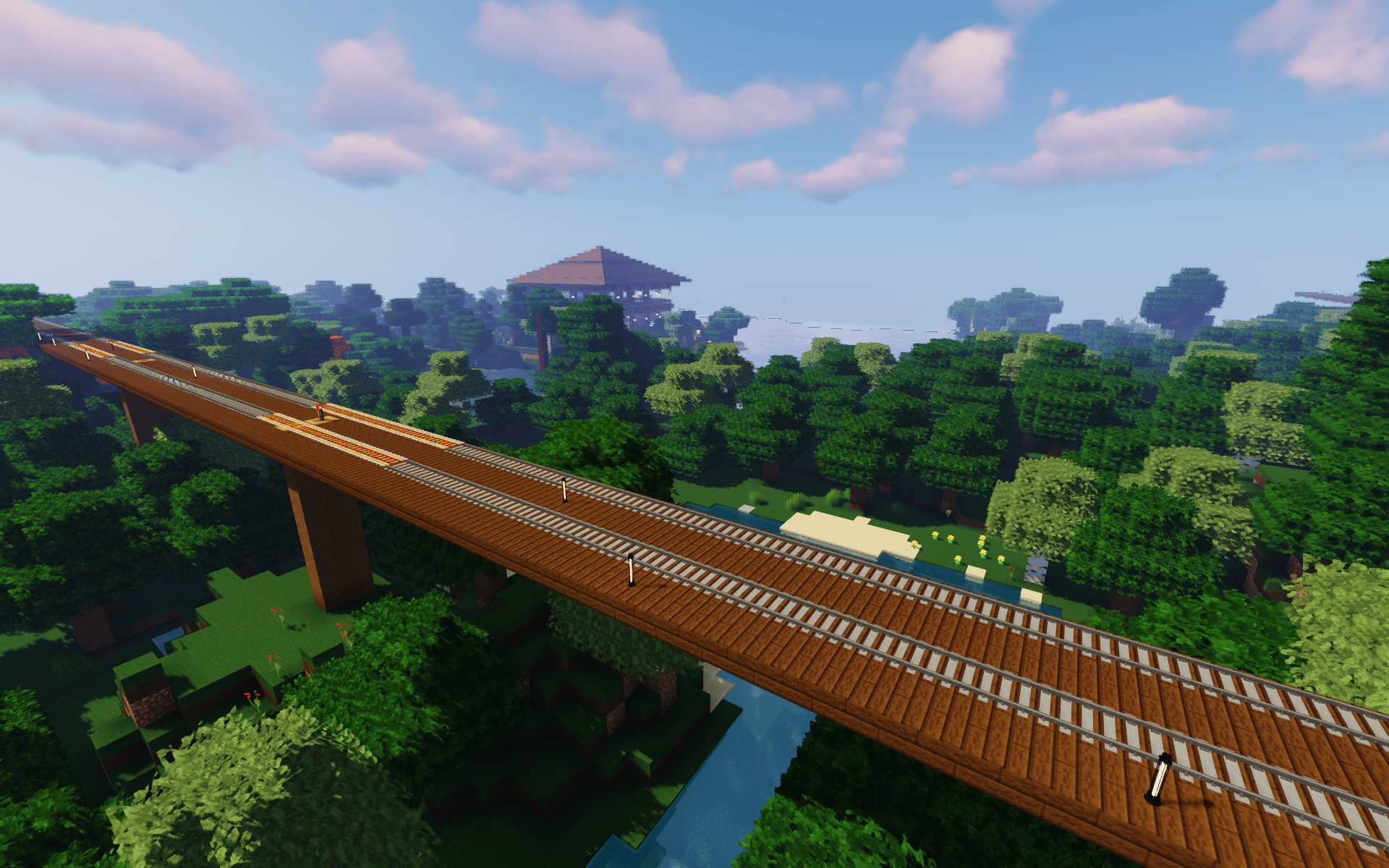 The Gratitude SkyRail: An Epoch in the Making!?!

A long time coming, The Gratitude SkyRail operation is finally underway.  But wait, what is even happening right now.  Well, time to take a step back and get everyone up to speed…

As many of you are aware, The Uplift World consists of a variety of creative and survival regions. In the early days everything was concentrated around and spread out from what is now known as the old world. The first community sectors went in about a one hour rail ride of where the cathedral now stands. Around this time the idea to break the world up into many smaller servers was thought about and implemented.  A rather heated debate ensued on whether this new community area should be creative or survival. In the end it was finally decided that two major community servers would be created, the first a creative realm now known as Genesis, and the second, the survival region of Gratitude.

Of course different in many aspects, one commonality between these two regions was the fact that they were populated initially by communities within the Blockchain and crypto space. Larger plots were gifted to communities to develop and showcase their building talents. Of course things got off to a running start in Genesis, as it was creative. But those in gratitude were known to be the grinders of the early days, savagely fighting tooth and nail through multiple losses in death to build some of the most spectacular survival plots you ever did see.

In an effort to showcase these early builds, UpLifters Caue Motta ‘The Uplift Jedi’ and Jimmy D began doing live coverage of Genesis and Gratitude community plots on a series entitled Journeys Through the UpLift World.  Together with builders of these various community plots, they would go in the world have a tour and find out all about their ambitious plans both within the managers and beyond.  Although all of the gas were great in their own respect, it just so happened the Jimmy D to quite the liking to The Nasty Hooks, so much so that they began a weekly series entitled The Maple Glazed Jerky Chronicles entailing going in the world and building out their community plot live on air.

It was quite an entertaining little series where Jimmy D in the nasty hooks would go in the world to work on what was then The Nasty Hooks Community plot.  Conversations being about as random as the builds themselves, eventually very its members of the nasty hooks community got involved and even started jumping in live for some metaversal buiding fun and randomized live rather off-the-wall chatter.

For those that have spent any time in Gratitude, you know the rails are a little bit different from some of the earlier regions like Genesis.  Covered in glass to protect from the elements, one of the most spectacular view in platforms is actually true about the rail. When looking at the map of Gratitude The Nasty Hooks plot is in the far south east quadrant. It was actually a half plot that was shared with another project. At that time competition for community pots was quite intense, and they were almost impossible to come by. One day however, bird bones miscarrying secondary market and just so happens to come across quite possibly the best community pot deal in the history of the Uplift.

The timing and stars aligned and The Nasty Hooks were able to acquire not just any community plot, but the one directly diagonally north west to where they were already based.  It only made sense for this to become the new Nasty Hooks HQ and the previous plot that of The Maple Glazed Jerky Chronicles community plot.  What was even more fitting was when the line was extended one more northeastern section, gratitude pagoda which was managed by Jimmy D could be found.  They often joked on The Maple Glazed Jerky Chronicle show how in need a sky rail connecting these three plots together and easing the pain of survival world travel.  It actually wasn’t long until Jimmy D realized this rail network could it be extended even further into Caue Motta The Uplift Jedi’s territory, and if he behaved himself potentially even split from the gratitude pagoda Southwest to incorporate the community plot managed by Michael of EOSUSA.

And so it was, for quite some time Jimmy D, The Nasty Hooks, and Caue Motta pondered when they might actually get the chance to bring this quite ambitious project to fruition. It couldn’t actually be done during the first Gratitude sale, as all the Estates and other properties were restricted to the central eastern part of the Gratitude map.  It was actually thought that depending upon which regions went up for grabs at what times, this endeavor might actually take some time.

As time passed by the plot changed hands one more time and has become the central building zone for all Stahlmann of The Giant Melon Shop, Cutty Sark Estate, and other incredible builds alongside Foxy have planned in the south of Gratitude.  For those aware of their building skills and passion, a nice addition to the neighborhood to be sure.  With plans to connect via the north to another giant area termed `The Heart of Gratitude’ the value add in terms of network effect just went massively through the roof as it were.  And so it came to be that the ambitions and stars of mini have aligned around the Lift Off auctions in early April 2022 presenting the perfect opportunity for Operation SkyRail implementation.  Ambitious as it was, in retrospect viewing the map the grand vision of the Gratitude SkyRail blew away even our expectations, and that is pre Round 2 auction potential. 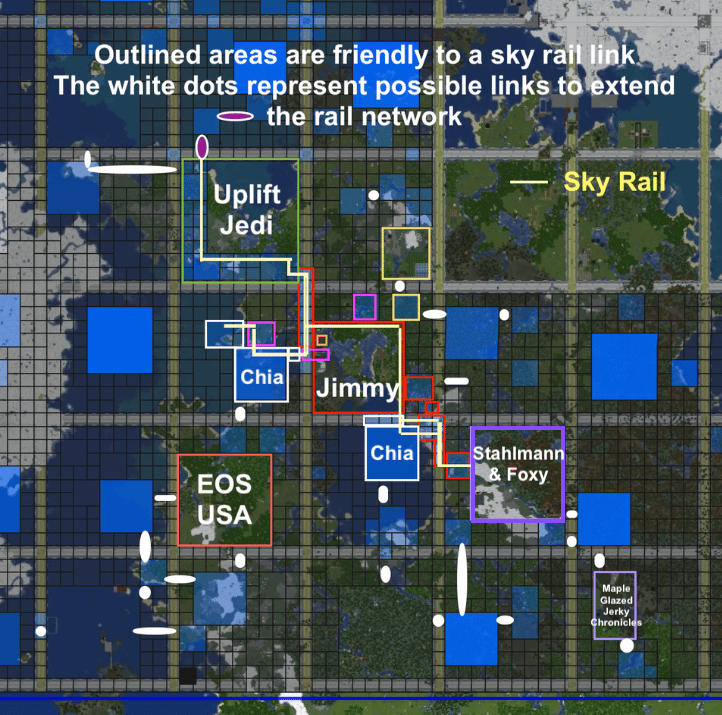 Is it planed chaos, or chaotic planning. Honestly, the jury still out.

In a haphazard way the whole thing just kind of came together. Jimmy D had in his sights the path through to the first 3 community blocks, one each diagonally to the northwest and northeast. In addition, the idea of an artist district in survival had been on Jimmy’s mind for quite some time. Having done quite a few featured posts on WhereWeHideAllTheAlpha.com and realizing that there were some survival heavy gallery owners in other servers, Jimmy invited them round to have a gander at what was not becoming not so secret of a plan.  With others in the area already and wanting to extend their presence, the connections gradually began to take shape.  When all the auctions closed a direct uninterrupted line through the three plots had finally been achieved.

Excited, those that were in the no about the SkyRail and art district surrounding the central gratitude pavilion over in the Jimmy community managed plot started pondering all the possible connections. And what was even more exciting, what is the potential to extend the sky rail to a secondary 24 hour round to auction. Just thinking about how many more community members could be brought into the fray of the SkyRail network was quite profound.

As can be seen above, with the addition of one or two land and/or rail plots here and there, the network could be extended across almost the entire central and south region of the map.  In fact, where did mouth started to get people quite excited about becoming a part of this new privatized SkyRail network.  And the best part, well, it ain’t really even on this map.  You see those two purple circles encased in white at the very top of the map?? That’s a 4 plot connection direct to Gratitude spawn!!

So as you can see the potential for this net work to connect actual plots that are managed by active people goes above and beyond almost anything that we’ve ever seen in The Uplift World.  That amazing capacity in fact, only grows with edition of the recently announced 24 hour round two odds and ends auction. So have a look at the map above, and figure out where you are in relation to those people and plots are already connected and about to embark upon one of the biggest community collective projects in the metaverse.  And and so you know it’s not just our smoke and mirrors, the plan central art hub around the Jimmy managed gratitude temple is already fitted with the first of what will become a multi plot and directional community connector known as The Gratitude SkyRail.

A survival sector over at 2600, 3700 Gratitude, this community plot became the core around the possible connective tissue of the community plots surrounding it.  Modest in build with some great views, the idea of a Gratitude SkyRail offering spectacular views alongside collaboratively connecting neighbors was first put into practice surrounding the pagoda and retreat. 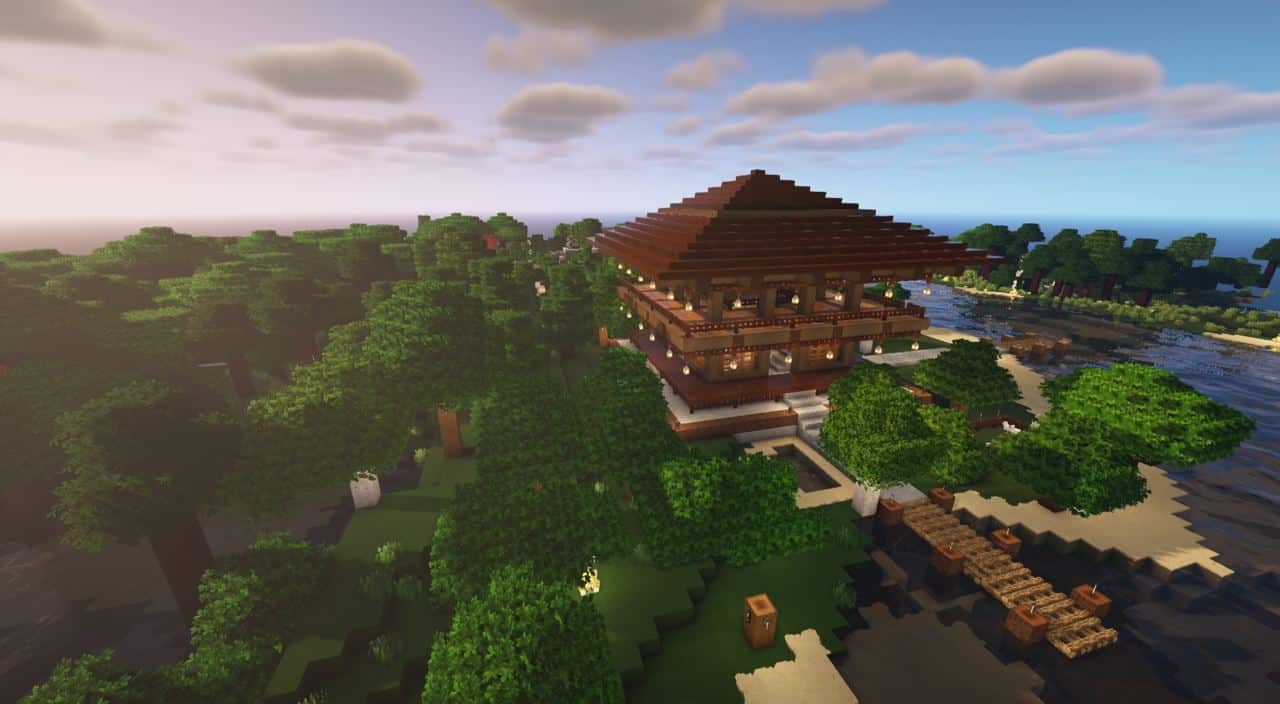 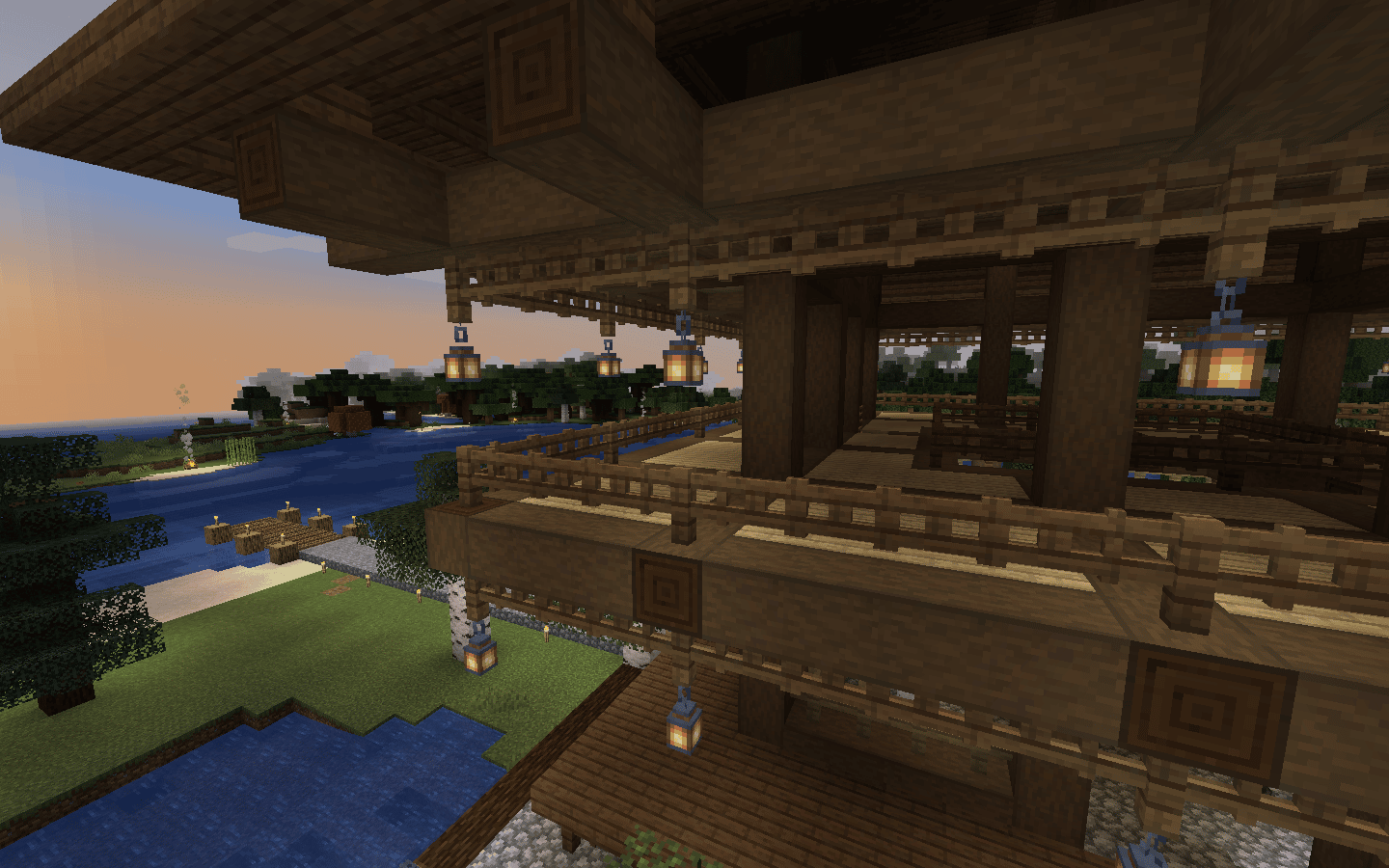 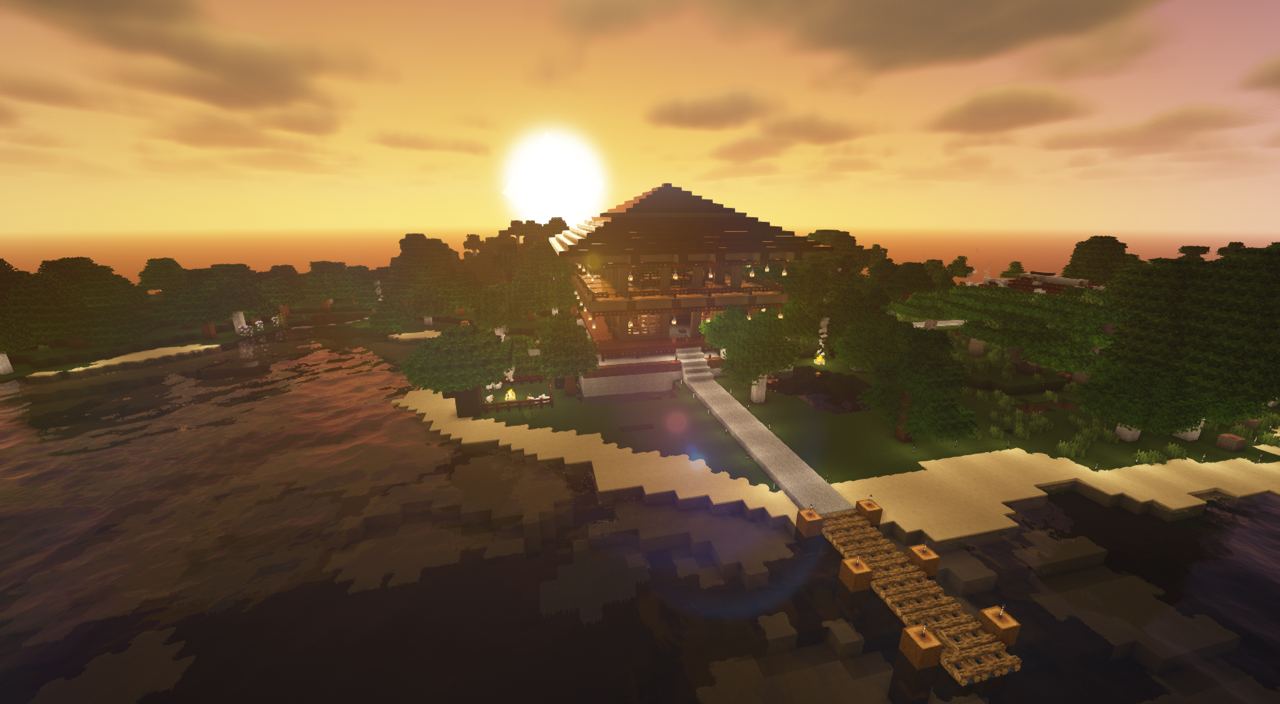 Beginnings of the SkyRail

A rail as a connective tissue was the aim, but giving that rail some purpose as a scenic route in its own right over time became equally as important.  The idea of creating a central area surrounded by survival galleries, shops, and all the other cool things you might find on a scenic rail really is appealing, especially considering this would be quite possibly the biggest collaborative undertaking the Uplift has seen thus far.  The dream as it were has already began surrounding the Gratitude Pagoda community fringe areas. 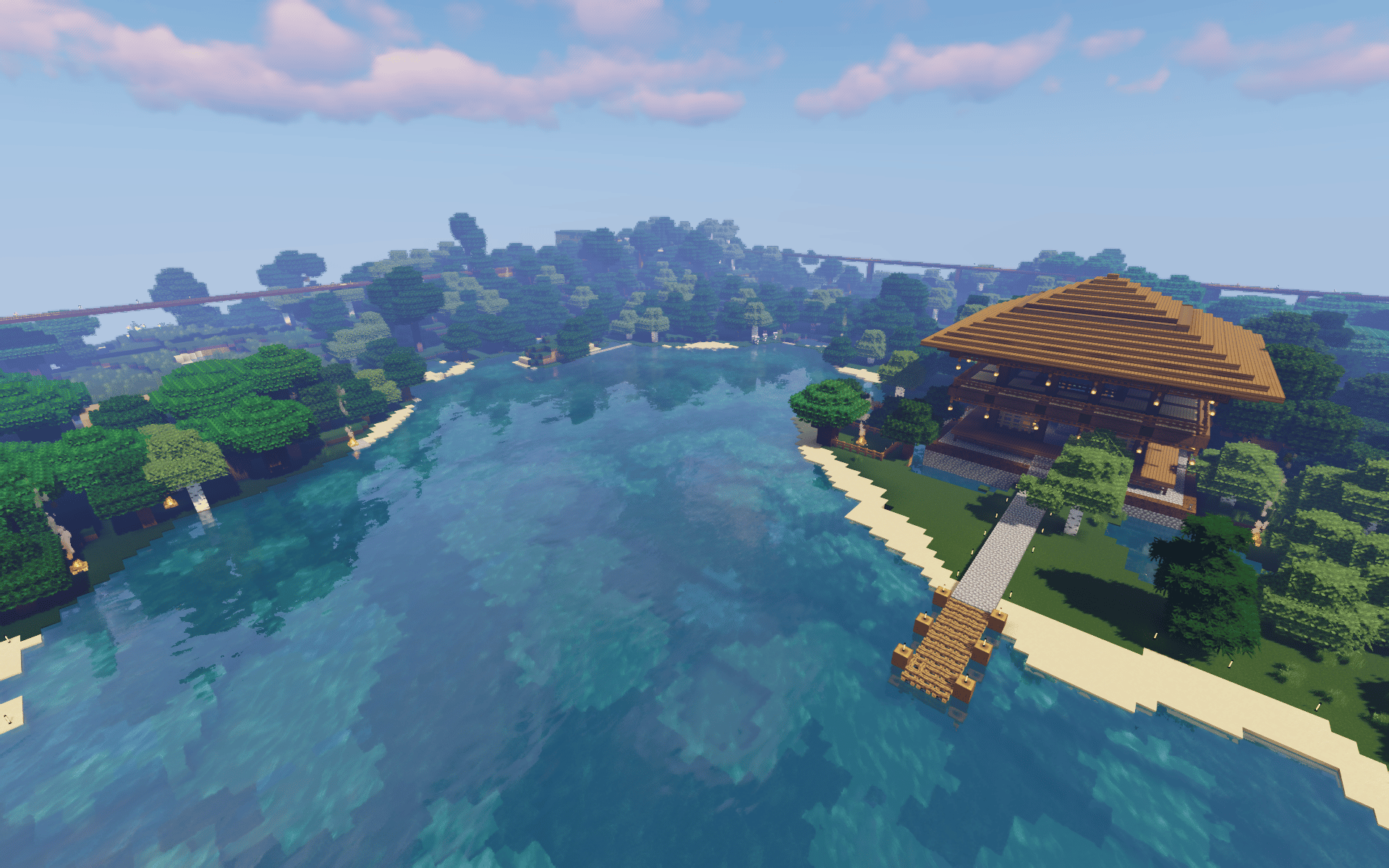 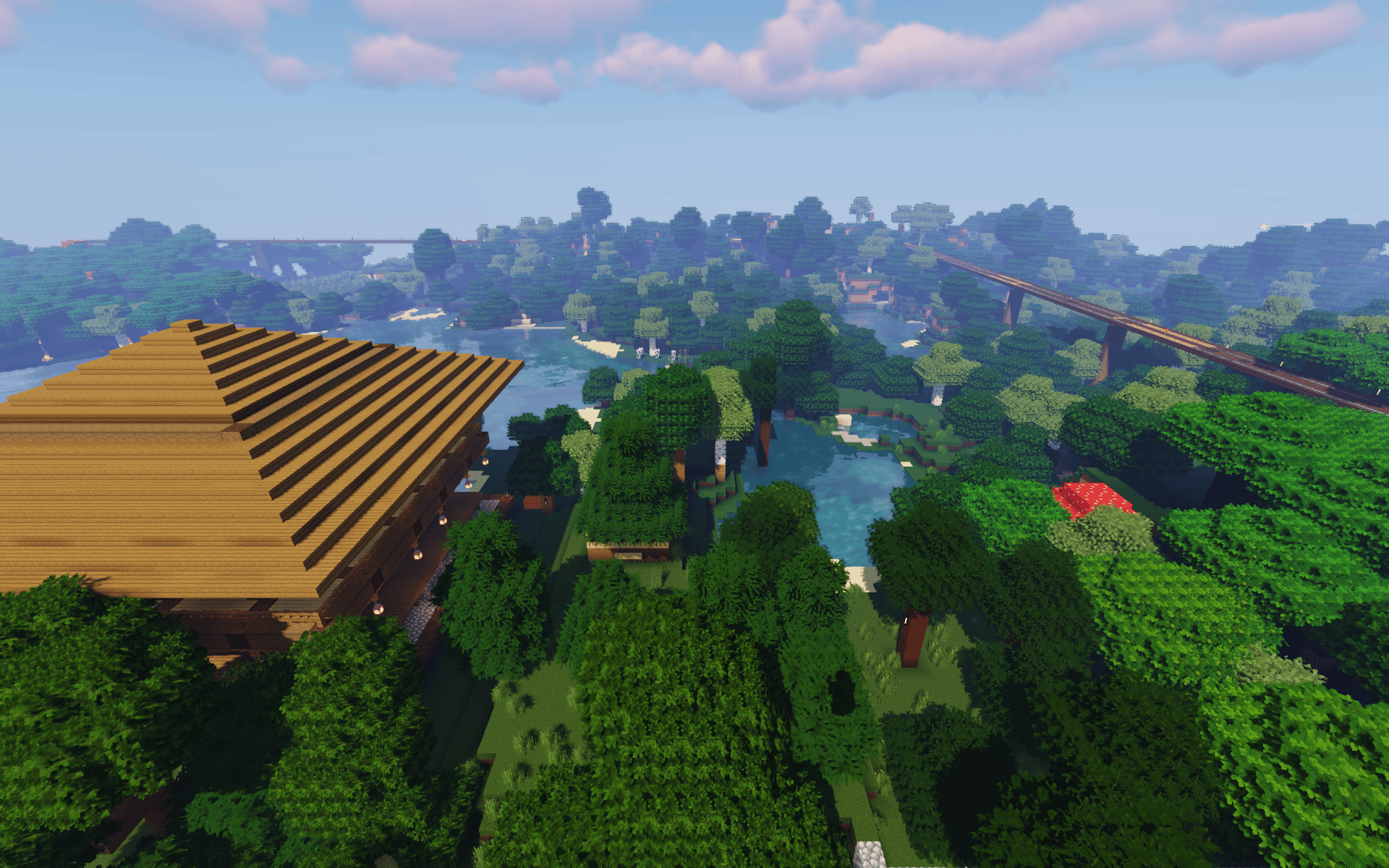 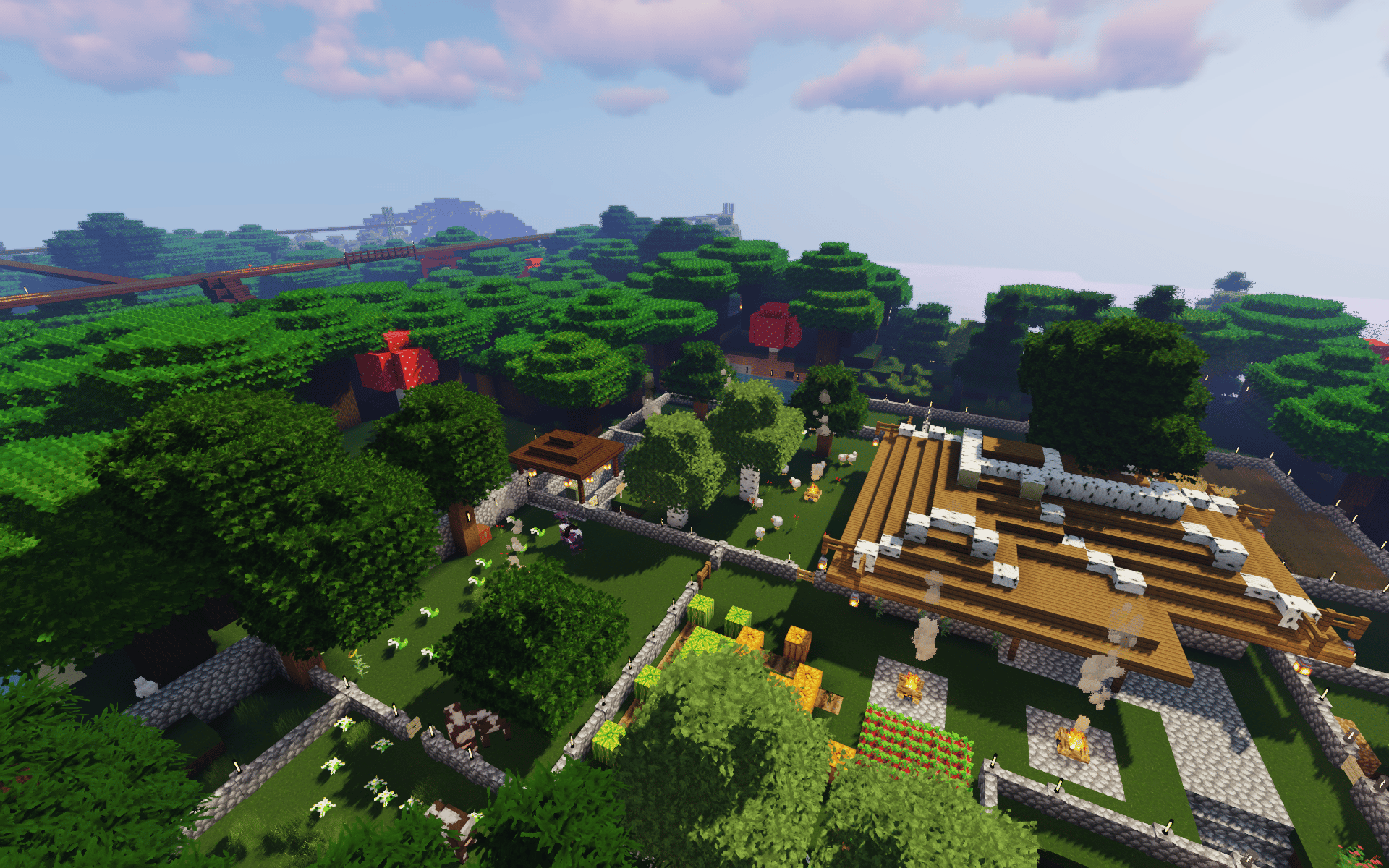 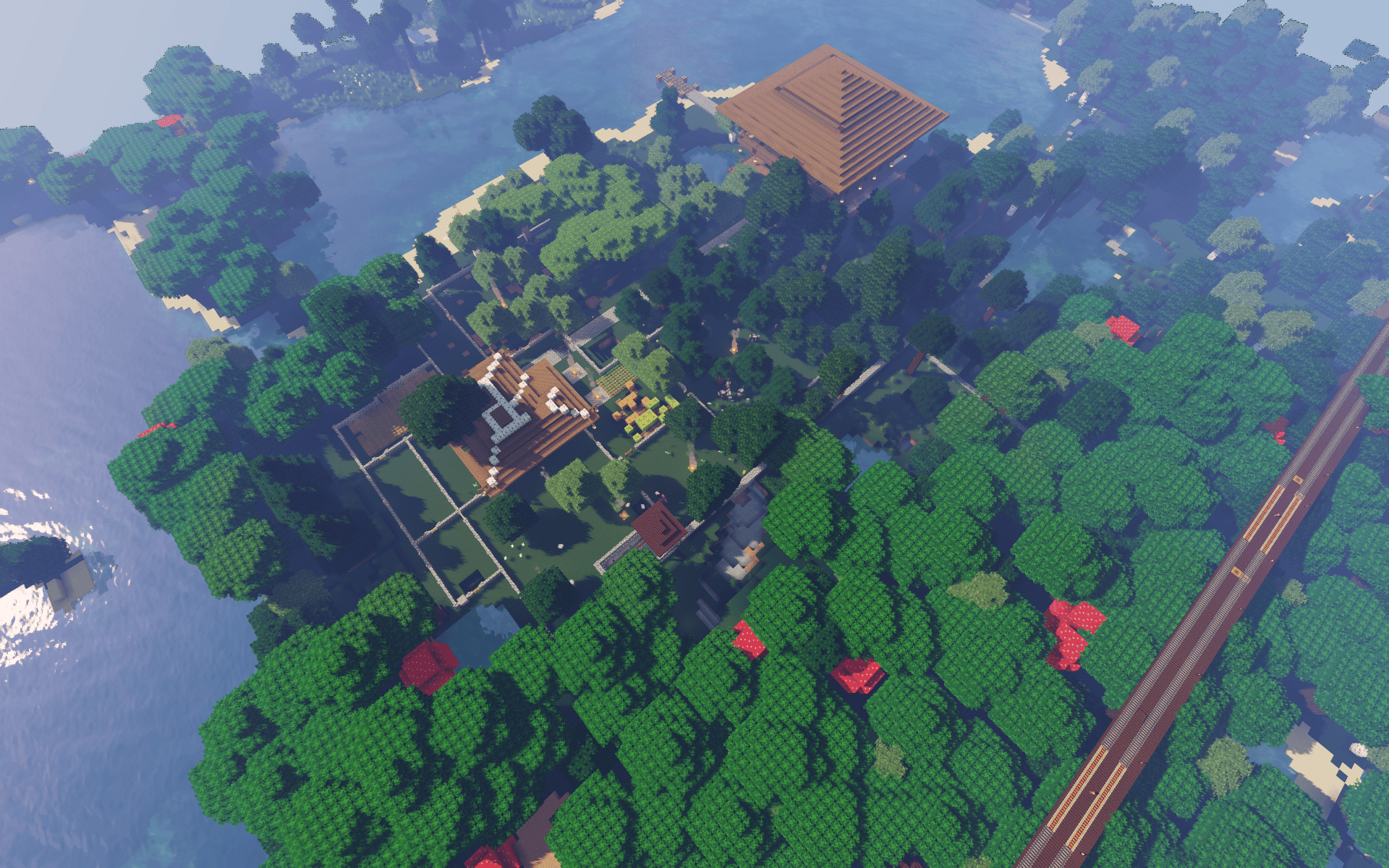 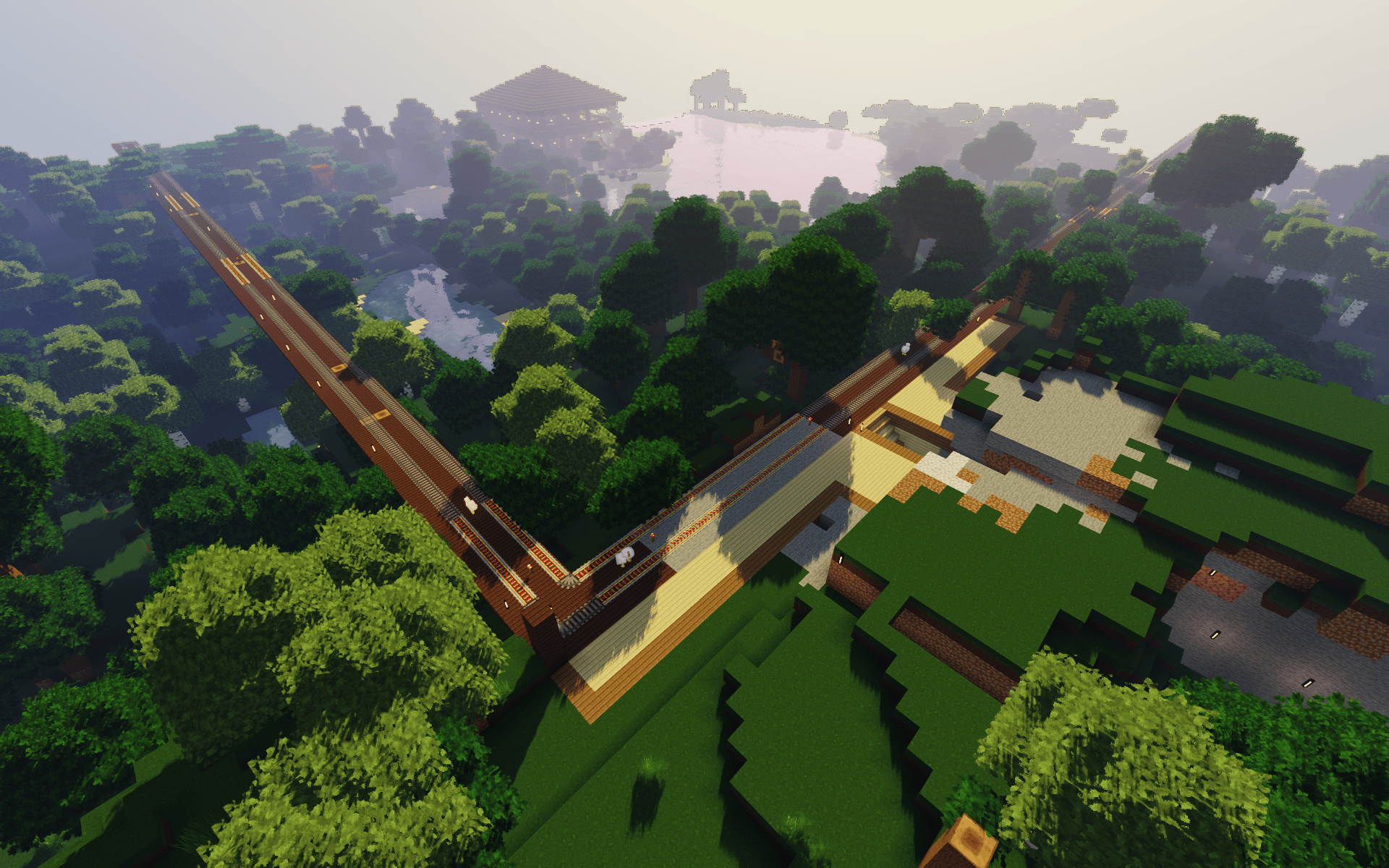 So for those of you out there that are looking to pick up a little something special for round two of the left off auction but not quite sure where, consider maybe joining a over in the server of Gratitude and lend a hand in the expansion of the first ever privatized SkyRail.  If you’re not quite sure how to do this, simply look at the map image posted above. You may actually have a plot they picked up in Round One of the Lift Off auctions that is only a plot or two away that you can see a connection worth making for Round Two.  Or maybe you’ve never been in Gratitude before, but you like what you see here and wanna be a part of it.  That is ok too.  Simply have a gander above and consider jumping in on one of many singular or lined plots that will extend the network for all and become part of Gratitude SkyRail commonwealth set to define how collaborative travel in the metaverse is experienced.

#Shameless_Plug_of_UpLifting_Proportions is a series meant for those builders and creators in the metaverse to shill all the self proclaimed amazing things they are doing.  Whether it be a shop, a gallery, a puzzle, an adventure, or anything that you can a photo of and write about, #Shameless_Plug is for you.  It is as simple as dropping some images, captions, an intro, and links into the form below and we will run it through our process standards and hopefully get all you are shilling out there for one and all to see!

* Article and images by Jimmy D.