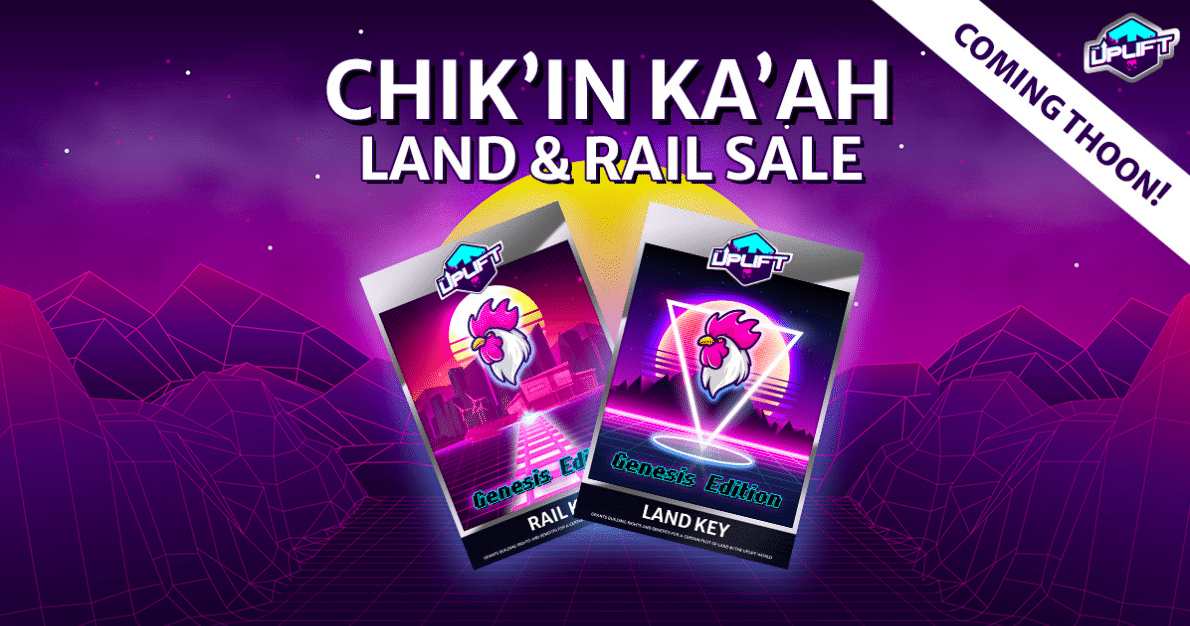 Monday, May the 10th, 2021, prepare yourselves for something new and epic in terms of how blockchain enhanced metaversal sales are done.  Chik’In Ka’ah, an independent sector managed and operated by the CK 7 old school Uplift crew will be putting some varied public plots on the marketplace in an exciting new auction event that will allow with the successful bidding of the Land and Rail developmental rights NFT the ability to hunker down and own a part of CK Uplift history.

The Smidgen of Backstory

Chik’In Ka’ah came about when a small group of minecrafters gone crypto decided that they would carry the legacy of what they had been working on and building together in what has now mostly become known as the Center City Historical District into a new vision for future worlds.  Being some of the original builders and participants in this world, the CK7 have continued to work side by side in the development of Chik’In Ka’ah in the hopes of creating something magnificent that all would yearn to be a part of and enjoy.

As explained by the CK7 founders, “West City in the Yucatec language is Chik’In Ka’ah.”  In it’s design then, this city is a post nostalgic rendition of things past with the possibilities of untold future promise brought forth with the gathering and incorporation of imagination of history made viable through the power Minecraft.  Divided into four quadrants, the only already developed is a mixture of fact and fable intertwining the mysteries of the Meso-American Mayan past with the creative energies of the CK7’s love of the beloved Chik’In Ka’ah mascot of a Minecraft chicken perched atop the pyramid and strewn around town of course, giving credence and clarity to a time where communal energy was thought to reign supreme.

With a state of the art rail system designed and developed to ease the congestion and potential headaches of Minecraft newbs feeling out the first strokes of the keyboard in other Uplift World sectors, the entire of feel of Chick’In Ka’ah has not only a nostalgia in appearance, but also in the way that the CK7 with their friendship in collective building and design came to be and design so very long ago in the old historic district.  Based entirely in survival and with notions to sector off certain regions where there may be the potential of mobs to reign supreme when the lights dim, the entire spectrum of what is possible in future sectors of the Uplift World has been thought about to an extent to carve out a special place where those of like collective, communal, historical, and technological mindset will want to call home.  And with that then, the whole point of this piece and why you are all here – to get to the good of the Chik’In Ka’ah land and rail auction.

The Chik’In Ka’ah Auction: How It All Fits Together

For the auction itself, various pieces will open up on May 10th, 2021 for first bids.  Although vary, the auction for the longest running pieces or rail will run for 3 days.  In this time participants with their eyes on certain land and rail plots will be able to utilize an interactive map of Chik’In Ka’ah and simply click on the auctionable plots clearly defined to be redirected straight away to the Atomic Hub interface a place a bit.  Of course, at the end of the auction period, the highest bid will take home the cake and a specialized land or rail development rights NFT will be awarded allowing anyone in the future holding this in their account exclusive development rights.

Why the staggered end times?  Simply stated, the central areas are likely to be the most sought after, so for those that cannot get their target piece, the capitol can then be redistributed to other plots for the longer running auctions if the participant so desires.  Remember, bidding on multiple plots at once is ok, but when you bid on something that WAX is locked up until either a) you win that item in the auction, or b) someone outbids you, so please budget accordingly.

As for the winners of each NFT land and rail development key, the second the auction is over the single nft key will be waiting at Atomic Hub for a claim action and released straight away allowing the winner instant development access to that land in the Chik’In Ka’ah sector map.

The sizes and location of plots vary, with land (and water) plots having differing resources, and rail plots coming with a pre-fabricated chest and resources to aid in the development and building of the eventual owner.

For a complete overview of all of the above and more, the following Chik’In Ka’ah Land and Rail Auction Preview with Corey and Greg is well worth diving into and absorbing.