When Gratitude Is Strong, Parallel Sentiment Grows Right Along

We officially interrupt the post in process for this surprise official announcement.

Not so long ago TheUplift.World embarked upon this little experiment jumpstarting into action what it might be like to put Minecraft on the blockchain, and in no time flat, where we are now is but a distant figments of that place in which we have been brought through our imagination.

Of course we have many to thank both internally and externally for where this whole thing began and the progression towards the promised land, but in particular, it is the graciousness of something that has transpired in the last couple of days that really has hit us where usually only the love button can.

For any who may not have had the time to follow what has transpired, well, rewind about a day – and yes, we are adjusting for crypto time in that calculation.

So in particular, the telegram channel has been a staple for a lot of what goes on with TheUplift.World.  It is where people come to get the answers to questions that they need, and although we also have Dr. Yunani to thank for all of the various Discord communities that have been set, the telegram is primarily where the moderators that are officially in sync with the project all began with their communications.  Since early times however, and likely in no small part to how helpful, kind, and open hearted all of the moderators alongside the team have been, the telegram channel officially breached 2000 members.

If rumors from the backdrop of crypto-scaped time are to be believed, at the threshold of 2000, in appreciation for all who have made this telegram community what it is today, Corey gave away a rail plot to one very lucky individual – have you seen what those puppies are worth recently.  Our good friend Recourier also jumped on board just because he wanted to join in the fun and decided to throw in a MetaForce pack, and coincidently, considering how fast those sold out in the MetaForceComics.io premiere event just yesterday, was also quite a pull.

In anticipation for the next milestone, an donation account was set up for whoever wanted to jump on board and share in the fun of seeing just how far and fast we could push this thing, and lo and behold, not a day later and we are already on the threshold of another giveaway at the 2100 telegram member count.

And for this one, what might that lucky individual get you may ask?  Well, you can see for yourself by heading on over to AtomicHub.io and checking out the account odncq.wam (https://wax.atomichub.io/profile/odncq.wam), cause pretty much now the projected value of nearly $1000 is definitely enough for two.

To be eligible for the actual draw don’t forget to make sure you are part of the telegram group (https://t.me/theuplift) fill in the form  (https://forms.gle/MYjkZbidihZCENqq8) before the telegram count hits 2100.

P.S. And do please feel free to keep this going.  We are already blown away and kinda hope to be more so by the targeted number ;D 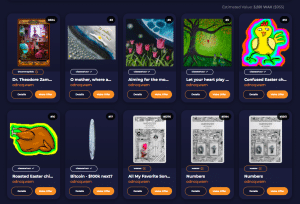 This community means a lot to us, and there is a sentiment piece along the way, but know for certain that we would not be near as strong without you all.  It really does blow the mind how the little things can add up, and we appreciate each and every single one of you that have jumped on board and dropped a little nugget in here for the 2100 milestone.  We wonder, could Satoshi have ever envisioned such a thing as communities coming together to drop in random pieces of digital NFT’s a decade plus later to commemorate that magical number in the blockchain lore that 21?  Regardless, in our humble opinion this community is 21 million times better than any other out there, and as proof for anyone who may question that, we have amazing acts of kindness such as this to correct any naysayers.  We are truly grateful to all of you and the spirited positive emotion that you bring to our beloved extended family out there in all parts of The Uplift World.

*Article written by Jimmy D, cover image  taken by Gary The Architect, and Cathedral at sunrise by Corey.