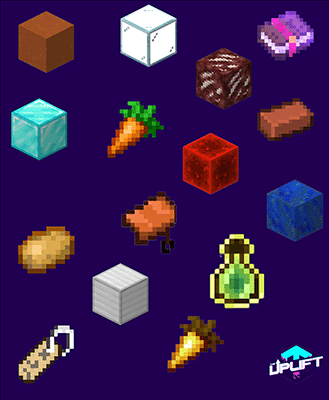 How to Get Rare Items Without Villagers

Obtaining rare items in Minecraft without villagers is possible!  Based on the list of things you suggested in the Telegram chat, I have compiled a resource for how to get the items.

The enchantment Uplifters seem most concerned about is mending. Items with mending use xp collected to repair any item that is in either of the player’s hands or their armor slots. The rate of mending is 2 durability for every xp point. Players will not keep the xp they earn while using an item enchanted with mending. If a player has several items at a time enchanted with mending, only one is repaired at a time, and it is randomly selected. If you do not earn enough xp while using your item, it will deteriorate. The mending enchantment cannot be combined with the infinity enchantment.

Name tags are used to name mobs to prevent them from naturally despawning. They can be obtained from chests in dungeons, mineshafts, and woodland mansions. They can also be caught from fishing. Using a name tag in an anvil costs 1 xp level. The Ender Dragon cannot be named, but you can absolutely name your favourite sword.

Saddles can be obtained from chests in dungeons, bastion remnants, desert temples, End city, jungle temples, nether fortresses, and strongholds. There is a 0.8% chance of obtaining a saddle from fishing. Saddles can be used to ride striders, horses, donkeys, mules, skeleton horses, and pigs. To control a pig, you need a carrot on a stick. To control a strider, you need a warped fungus on a stick.

Golden carrots can be crafted by surrounding a carrot with gold nuggets. They can also be found in chests in bastion remnants and ruined portals.

A Bottle o’Enchanting releases xp orbs when thrown. It can be found in shipwrecks.

Zombies, husks, and villagers have a 0.83% chance per item of dropping a carrot, potato, or iron ingot. Carrots and potatoes can also be found in shipwrecks.

Quartz generates in the nether an average of 16 times per chunk in blobs between 0 and 24 blocks, between levels 10 and 117. In basalt deltas it attempts to generate 32 times per chunk because there are fewer valid generation areas. The nether is infinite – there should always be quartz available, you might just have to plan for a very long walk to get it.

Glass is made by cooking sand. Coloured glass is made by combining glass blocks and dye on a crafting table. Glass can only be mined by a tool with silk touch, otherwise it breaks. There is lots of sand on Nemesis, and there will be many opportunities to trade for sand once the P2P trading shops are set up.

Terracotta can be crafted by smelting clay. It can also be found naturally in badlands biomes. It generates in desert pyramids and underwater ruins. It can be mined using any pickaxe. It can be combined with dye to make coloured terracotta, which, when smelted, makes glazed terracotta.

Bricks are crafted by smelting clay. They can be used to craft brick blocks or flower pots.

Diamonds, redstone, and lapis lazuli can all be mined, and are all over Nemesis. Diamonds can also be found in chest loot in mineshafts, bastion remnants, buried treasure, desert temples, jungle temples, End City, nether fortresses, shipwrecks, and strongholds.

Lapis lazuli can be found in chests in mineshafts and shipwrecks. It is used for enchanting.