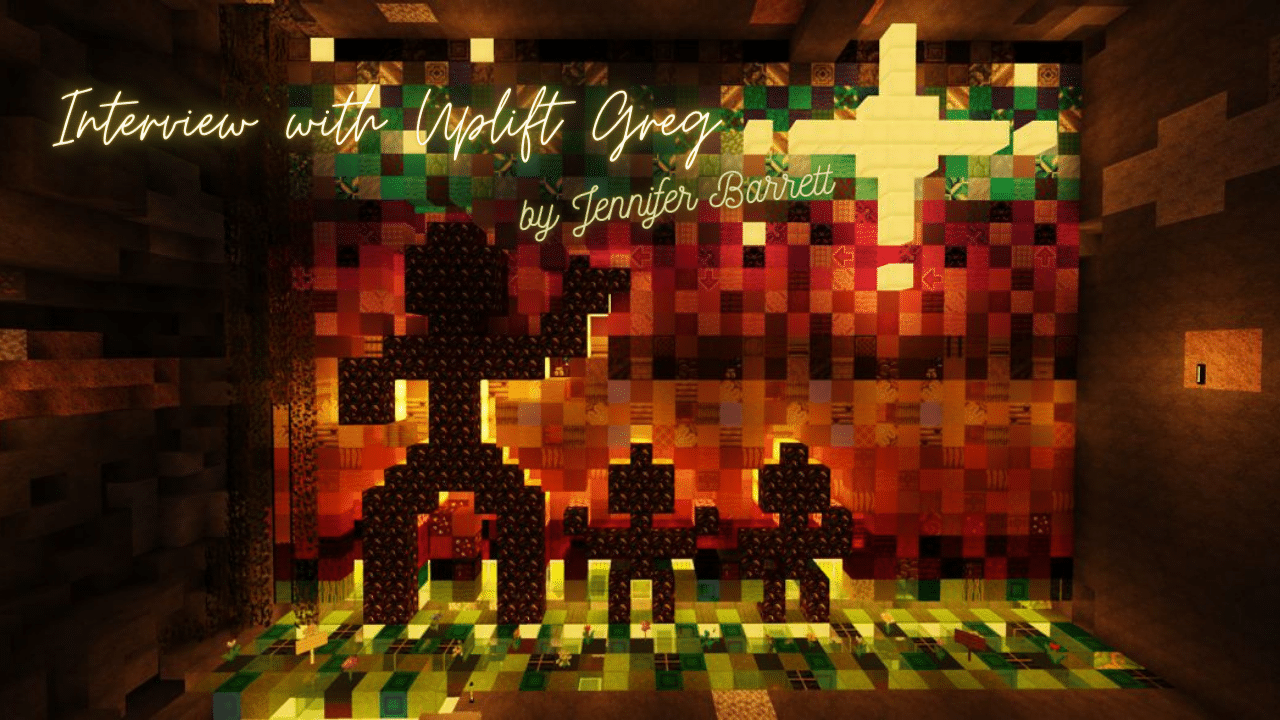 “I’m the guy that turned the server on, back in the day,” said Greg Smithwick.

“The origin story is pretty funny, because Corey and I both had been politically active, progressively politically active. We called our show a shelter space for progressives for a while, where people could come and we could talk about things that needed to be fixed,” he said.

“The idea was, first we… wanted to engage young voters, because we saw the low turnout in 2018 of young voters. We decided first we were going to play Fortnite and talk politics while we played Fortnite, but it was just basically eight seconds of us playing and then yelling, ‘Oh shit, I got shot again!’ It was too frenetic, it was too frantic for us to actually have a conversation,” he explained.

“I’d been playing Minecraft a lot more than Corey, but you know, it’s a pretty peaceful thing, we could make a little space, we could have guests in, have a third account so a guest could be in the game with us, and we could talk about local politics and try and do voter engagement that way. And that’s why we started the server,” he said.

“We never got around to that because almost immediately, the third person that came into the server put a gratitude sign on the beach, and that shifted us back into that gratitude practice,” he said.

Greg met Corey 5 or 6 years ago when he was interviewing local musicians for his Access TV show. “He was one of only two people in the world who was excited that I was doing a podcast,” Greg said. “A couple of weeks later we did a sit-down where we talked for an hour about the M drive, which was the theoretical drive propulsion system for space travel. We were going to do a half hour, and we ended up doing three hours of podcast material in one sitting,” he said.

“He was producing a podcast which was basically him and three friends drinking Jaimeson and yelling at each other, and my podcast was very polished and had commercial breaks and it sounded like a radio show,” said Greg.

“Maybe six months in, he discovered the goals and gratitude practice… it’s not just about expressing gratitude,” he said, but about setting three goals for the day. At the beginning of the day you express a gratitude, he said, and at the end of the day you take stock and see what got done. They started doing it on their show every day, which is where some of the members of the Chik’in Ka’ah seven met.

“We had a retreat where we invited all of our people that watched and listened to us to come out to a farm in Brooksville, Florida, called the Great Spirit Farm,” he said. “We had a three-day weekend of gratitude expression and goal setting, and it was a real revelatory moment for me. A lot of great things happened,” he said. “Before that, only one of the people in that circle had been a part of my life. These were all new friends to me from that day,” he said.

Greg and Corey kept up their gratitude practice, and he said it was natural to invite the gratitude group into the Minecraft world on Sundays for a gratitude ceremony.

“The Uplift.World is an unexpected development to me. It’s just not a thing that I expected or saw coming. The things that Mblu introduced to the Uplift.World are things that we were thinking about, not that we were doing directly, but the kind of thing he does where he uses art to raise awareness and money for charities and dumps money on charities when he can. That’s things that Corey and I had been doing in our local community for 5 or 6 years now. Any time we found a good local project, we would do everything we could to express our interest in it and show it to other people. We generated quite a bit of money for local charities through the broadcast work that we were doing. It was a natural fit but it was really unexpected,” said Greg.

Continuing to do real world good in the metaverse brings us to Shipple. “I heard you talking to Corey yesterday about Shipple,” Greg began. “The Shipple project and the Shipple coin, that was the beginning of my effort… to want to learn about cryptocurrency. I couldn’t understand why he was doing it. I couldn’t understand why if Shipple had, you know, zero value in the real world, if I couldn’t trade it for dollars or rupees or whatever, what was the point?” he asked. “I was shocked that people were wanting the currency.”

“What I didn’t understand then was the idea of mooning, basically of people buying very, very low value currencies and just holding them until something happens. Maybe it won’t happen, but maybe it will, and so there was demand for the currency. We had this big group that we were doing a lot of memes, we were having meme contests and giving away a little bit of Shipple, and every day, “Where can I get Shipple? I need Shipple! How can I get Shipple?’ And I just didn’t get why that was happening. I got a little frustrated, like I sometimes do in the Telegram group, I get a little cranky about people asking the same ten questions over and over again,” he continued.

“My friends Kira and Randy Withers run a local pagan charity called Hands of the Goddess, and they are a 501C3. One hundred percent of everything they take in goes right back out to hungry and needy people in our community. They are extraordinarily hardworking, and they don’t raise enough money. They didn’t have enough eye line. So I went on the facebook group for Shipple one night,” he said, and posted, “Well listen, if you really want Shipple, you go out tonight and you make a donation of $20 or more to your local homeless shelter or your local food bank. You come back here and you post a picture of the receipt, I’ll give you… I don’t even remember, maybe 15,000 Shipple,” he said, because Corey had just given him something like 9 million Shipple. “I’m like well, thanks,” he said. “He’s like, ‘No but give it away. Find someone to give it to.’ And so I decided rather than just give it away to people that were my friends, that I would incentivize people to do it. So on that day, we raised about $700 for charity, for a local charity that does an enormous amount of good work in our community,” he said.

“I was shocked. I was absolutely really shocked that people stepped up. Some of those people, by the way, are still giving to Hands of the Goddess to this very day. They learned about the charity from that effort, and some of them are not local people. Ginnie is one of them, that donate there, but we have friends from Ohio and California that every once in a while Kira will get a box of socks or a box of razors or something from Amazon and it will have a note attached to it and it’s from one of the people in the Shipple community,” Greg said.

“That was the revelation for me,” he said, “that you could use digital currency and digital means to do real world good.”

This experience made it easy for Greg to understand how Mblu’s project with the Haitian schools happened, because they’d done that on a smaller scale before. “It was part of the reason that Marty Bullshipples stepped back into this project was because he was part of that, and he recognized, he remembered that we had done some real world charitable giving because of a crazy little joke coin, and he wanted back into this project because he saw the potential and here we are,” Greg explained.

“The Uplift raised enough money by mid March to build the first school in Haiti. That was their goal for the entire year, and they reached that goal in March. Now it looks like we’re going to raise a considerably larger amount of money to do more good in Haiti,” Greg said.

“And by the way, the Shippletopia project, you know, what Marty did,” Greg said. Martian Bullshipples approached the Chik’in Ka’ah administrators and handed over funding for and control of the future Shippletopia Foundation. “The Venn diagram… of the Chik’in Ka’ah seven, our ownership group, and the Shippletopia Foundation, or Fund, we can’t really call it a foundation yet, is a circle,” he said. “It’s the seven of us, right? And our decision was, based on that experience with Shipple, we’re going to focus on charities that are sort of below the horizon… that don’t get publicity, that are local,” he said. One of the current project ideas is to give bicycle helmets to kids in Jen’s community.

Chik’in Ka’ah is “a semi-autonomous region within The Uplift.World. We will eventually be on our own server, and that allows us to make the rules and determine the future of that city economically. We own a virtual city, and ownership sounds weird when we talk about a municipality, but the land was granted to us because Corey trusted you and Russ and me and Sue and Ginnie and Donna and Katy to run it in a way that would be good for the people that wanted to inhabit it,” Greg explained.

“It was also a test case for him to give regions to other people to operate… we still have to pay attention to the rules about… terms of service, like the PG-13 ratings, no casinos, no giant genitalia builds, but we can make our own rules as far as building design or building height or whether to have mobs enabled in the city so that you can gain experience by killing monsters, how to reward people,” he said.

“There’s the basic game system which is going to use WAX but we have some ideas now about using Shipple to reward people within Chik’in Ka’ah specifically. I had a really great conversation with Marty an hour before this. Marty Bullshipples is the guy that started Shippletopia in our city. We sold him quite a bit of land to develop a project. We were talking about benefiting sustainable projects. In other words, if somebody mines out their entire region and there’s nothing left in there, then that land doesn’t have value forever. If you mine out all the coal and all the iron and all the diamonds in it, it’s gone. But what if we made it so that if you did a sustainable project, something that renews itself, like farming, like animal or tree or food farming, that we would reward you with Shipple for having this sustainable effort on your land within Chik’in Ka’ah. And that would then allow us to sell those items on the market to other servers,” he explained.

“The way we’re looking at this is sort of a model for how you could model a city in the real world and feed everybody and create a sense of happiness and contentment,” Greg said.

The Chik’in Ka’ah land and rail auction begins the first week of May.

*Cover image of a build done by Jennifer Barratt in Center City of theUplift.World, photo taken by Gary the Architect