The Uplift BLDRZ: Featuring the Many Magnificent Talents of Mitzi

It is actually quite uncanny the amount of amazing buildz, projects, and people involved across this little metaverse we call home has become.  The Uplift World BLDRZ blog is intended to be one avenue where we can feature projects, individuals, and teams doing amazing builds within multiple sectors of the Uplift World.

Today we will dive in with Mitzi of MitzisNiFTis to discuss the sensation that she has recently become inside the Uplift World.  As we have pointed out many times on the Journeys Through the Uplift World shows and others, there is a new breed of community leaders that has emerged in recent times from within the Uplift World Metaverse.  Unlike those with pre-existing communities, these leaders have utilized the structures of that metaverse which we now call home through various buildz, interactions, and events to form a new type of communal experience entirely focused within their small sub sectors of the Uplift World.  In some cases such as Mitzi`s, the combination of the builds, the regular events, and a bright positive out looking personality has brought about a staple in here little corner that has continued to grow quite quickly over a very short period of time.

How did you first get introduced to top blockchain and cryptocurrency?

I got my first Bitcoin as pay for some freelance work I was doing back in 2013.  As Bitcoin was pretty new then, we had no idea what it was!  We downloaded the whole blockchain and it took a week!  And all just to get a couple Bitcoins. It was a bit crazy we thought!

I can’t even tell you how many went through our hands. Maybe 30? They were only worth $13!!  So we exchanged them and used them the same way we use any other income.  Literally it was a Bitcoin pizza situation.

In fact, I remember it being news that someone had used bitcoin to buy pizza.  Some time later my husband was telling me about a new blockchain called EOS and that he was watching and waiting as the first chain was accepted by all the block producers and the EOS chain was born.  So to be involved primarily with an EOS sidechain and one as forward thinking as WAX is fantastic!

What is it about the future of blockchain and cryptocurrency that excites you the most?

I think cryptocurrency will help equalize the masses and make it better for the 99%. I think it has the possibility to be the only currency in the future.  WAX is bringing a balance between tech needs and ecological progress and that is something that will bring WAX to the forefront as we move forward.

Are there and blockchain ore crypto projects you are directly affiliated with and what is it exactly that they do?

I started making NFTs on the WAX ecosystem this year. I photograph things I find that stand out to me and demand to be preserved.  My collection is very different to most anything else you will see at Atomic Hub.

I am also a pastry chef so some of them are food that I created. I think that my collection will appeal to women and to those of us who are averse to the constantly moving GIFs most NFTs contain.  Maybe get one for your loved one?

I’m not whitelisted on Atomic Hub, they said no.  I asked why and they said “Art is subjective” which was my point exactly. This will not stop me.  I plan on applying again in the future, unless they decide to just go ahead and whitelist me after reading this 😉

How did you first find out about TheUplift World?

I found TheUplift in the WAX d’Apps tab.  I was like, what’s this??  Minecraft on the blockchain???  Yes!!!!  This was in April 2021.  We had missed the first pack sale and thought we were too late!  By May 5th we had found a way to get our first lot in Genesis.

A couple weeks later we picked up 3 Londom lands and a Londom rail.  This is where we started building hotels. We heard that in the future TheUplift would be allowing non-land key holders the ability to get in game, and we figured these folks would need a place to stay.

At this time, rooms are free at The Pioneer Hotel, and you can pick one out and have your name on the room forever. I will even help you redecorate the room to your taste. Some of our current friends/tenants have lots on other servers but use the hotel to be their Londom home.  They come and do our weekly quests that we have there with free NFT giveaways. Or they use our nether portal as it’s a fairly safe area to enter the nether. To find our nether portal, jump off the diving board and follow the river to the east!

Can you explain the overarching themes of the Uplift World hotels you have been focusing on.

The Pioneer Hotel, Londom (1750, 1500), is our first hotel.  We wanted to build something using all infinite resources and to be appear as if it was straight out of an old western set.  Most of it is built by trees we grew and harvested ourselves.  The only finite resource used was the iron that went into all the lanterns.  We hand mined all of the iron for this, no bots were used. It took us a couple months.

Sovoccor built all the mines, the underground adventure, and the frame of the build.  I built all of the floors and rooms and did the decorating.

The top floor has picture installations and will have all of the NFTs given for prizes around the room.  When we reach week 20, we are going to have a special prize for anyone that holds all 20 of my promo NFTs.  Those that do this, will get a permanent room at The Aztec Hotel! There are only 16 rooms available, but we can always build up and add more if more than 16 people collect all 20. After that, we may have to add more floors as we plan on holding weekly events at The Pioneer Hotel permantly.  These start every Tuesday and go until Sunday. 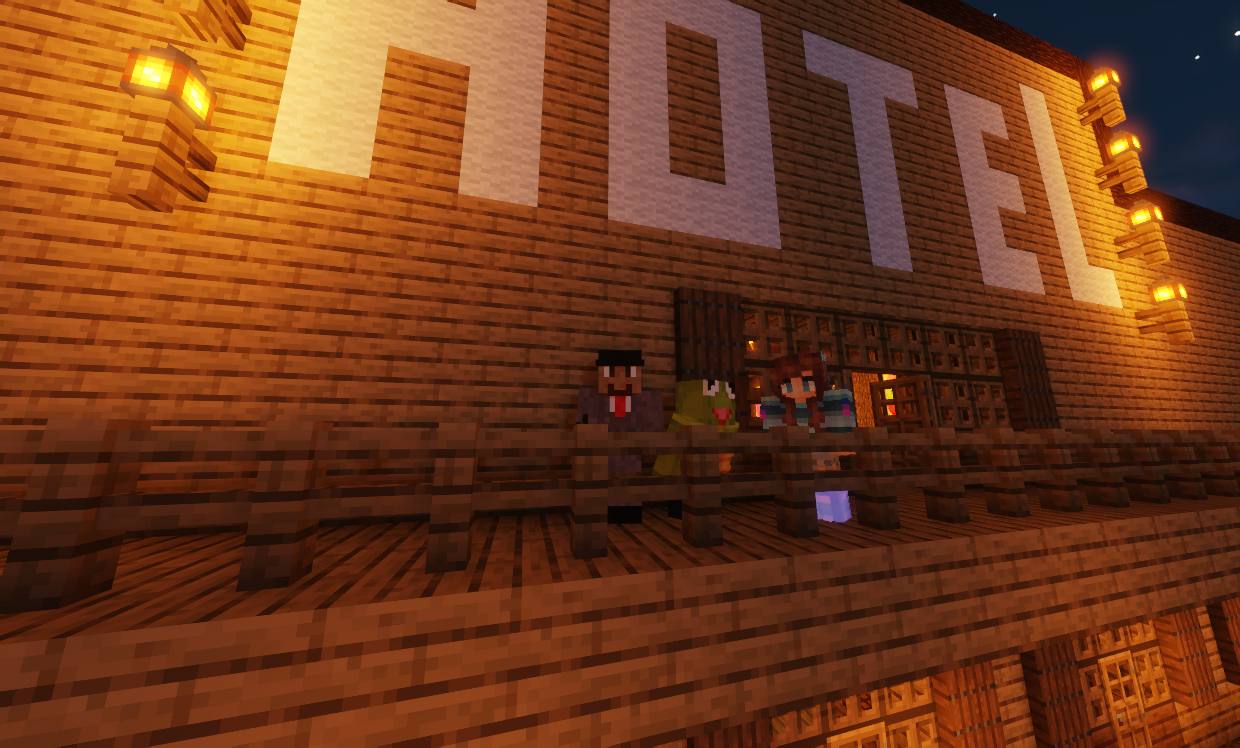 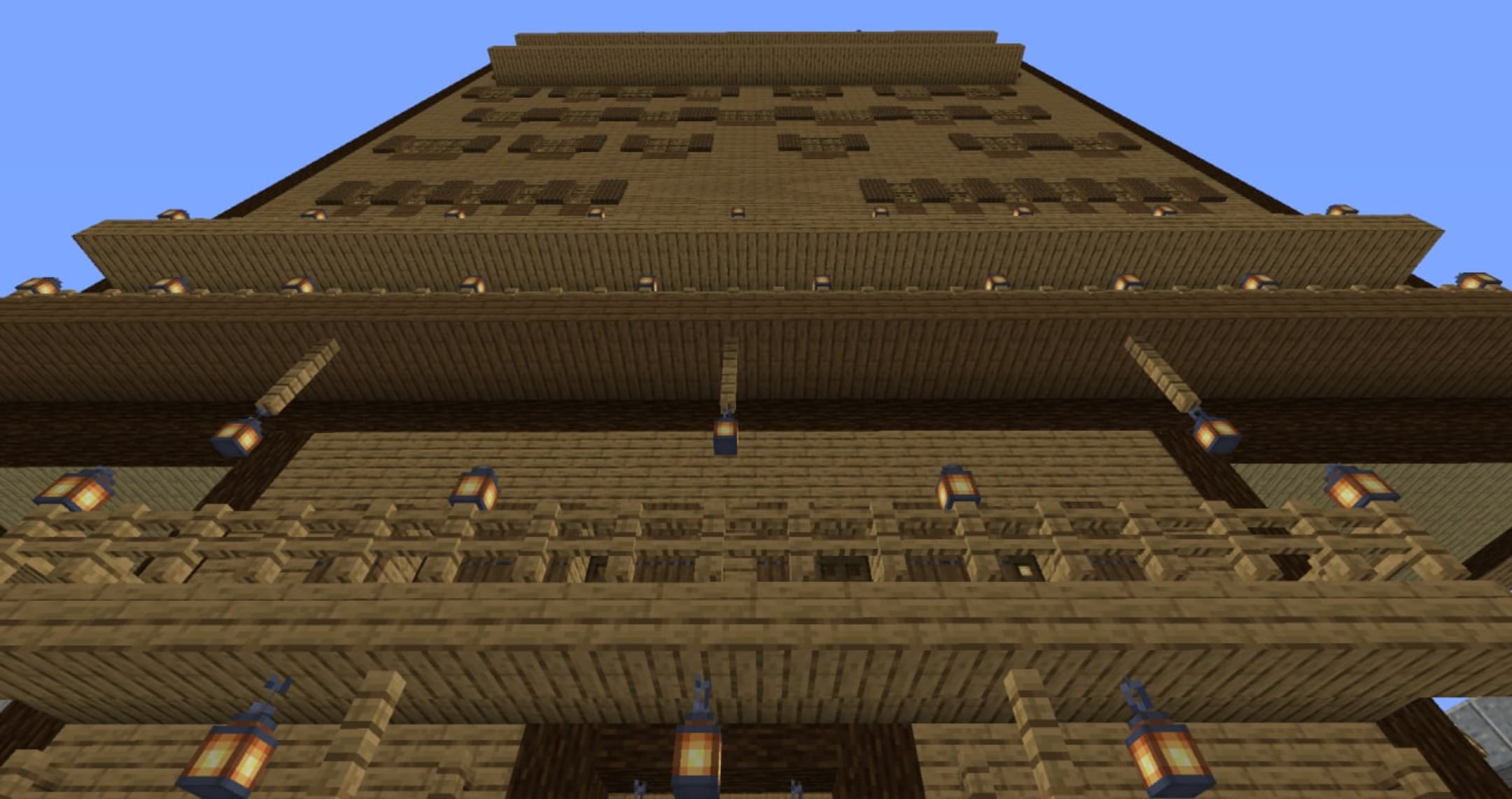 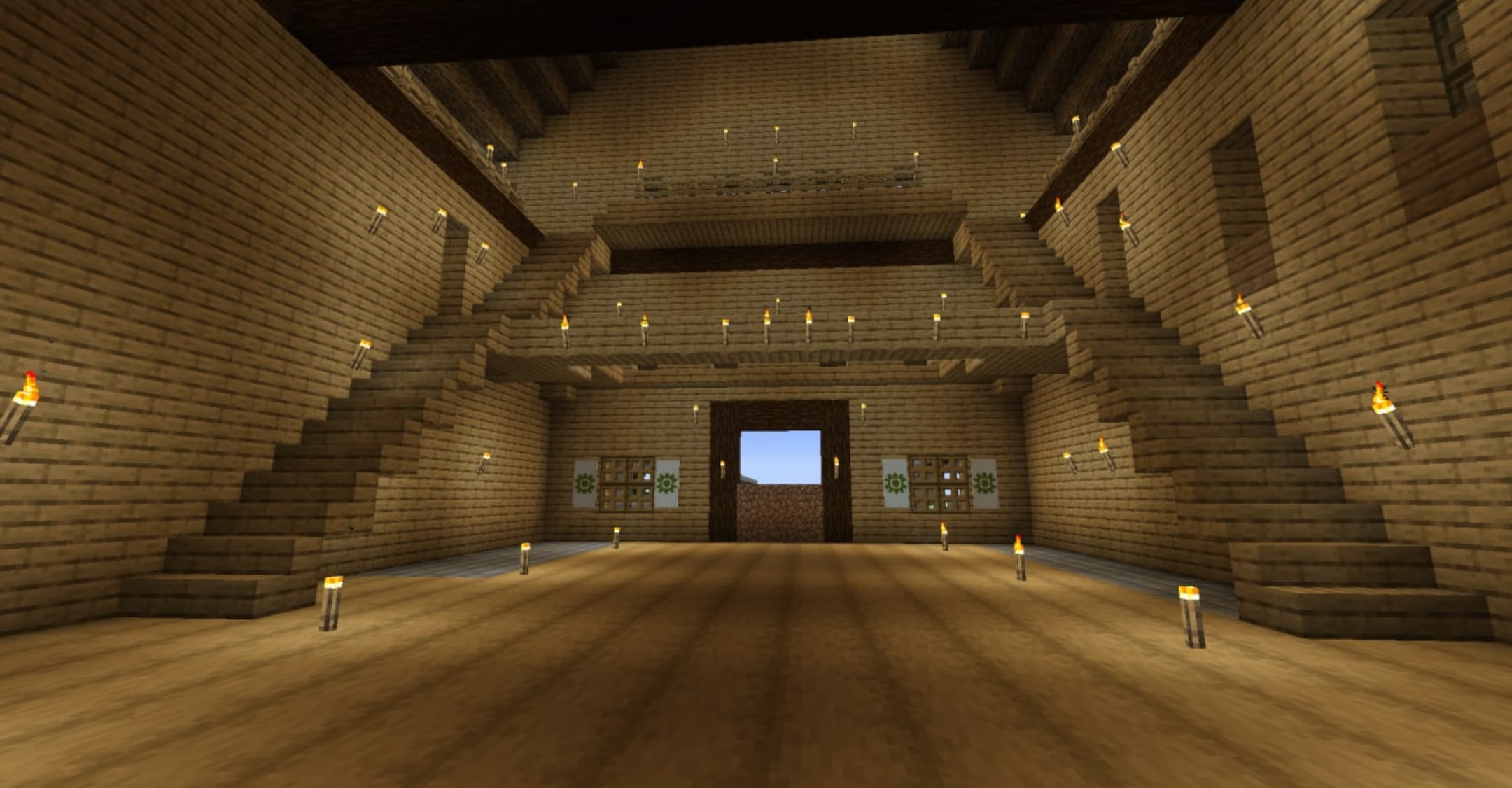 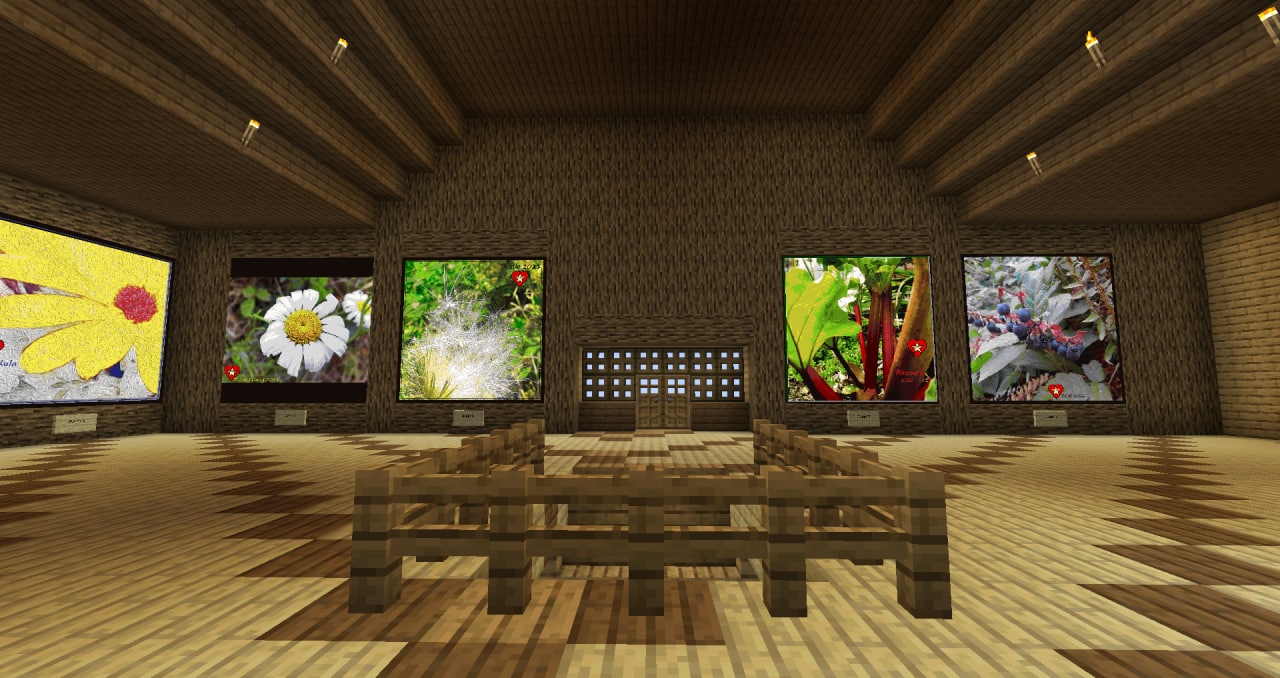 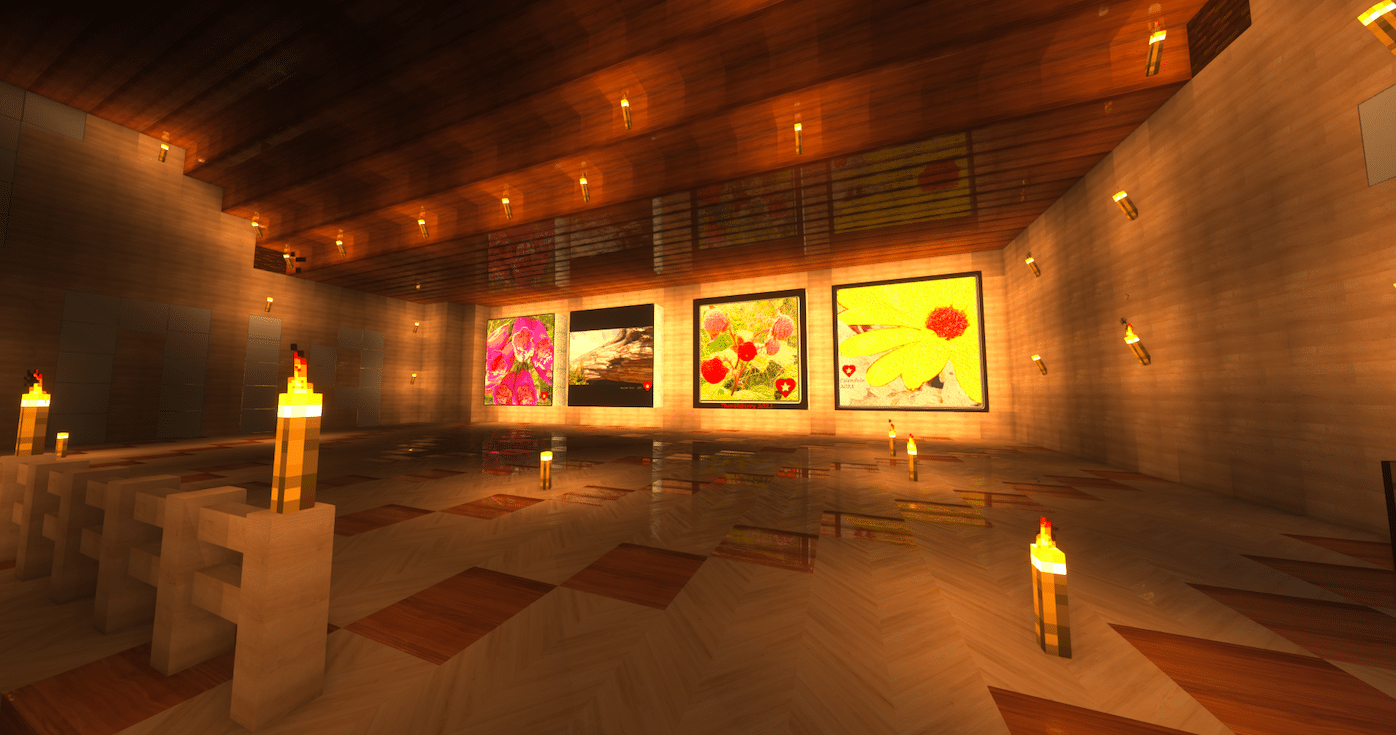 The Aztec Hotel, Upluft (1000, 2000), is hotel number two!  Right now the lower levels do not have rooms, and I think they will be used for more picture installations as I will be creating and giving away NFTs for the weekly quests here as well. There are beds around and you are welcome to set your Upluft spawn point here if you wish.  Room naming rights will come later, yet to be announced.

On this build, I started putting down blocks without a plan, and before I knew it, I had this big guy grinning at me!  It’s built mostly with polished diorite, spruce and acacia.

Sovoccor built the undersea adventure here also. It’s called The Aztec Hotel and Video Game Immersion Experience. There is an observation area where you can watch, or check out the course before you enter it.  The idea is that you be the video game character not just control it. These quests will start every Thursday and go until the following Tuesday.  You are welcome to go through the course anytime it’s open, however those who complete it first get the lowest mints. 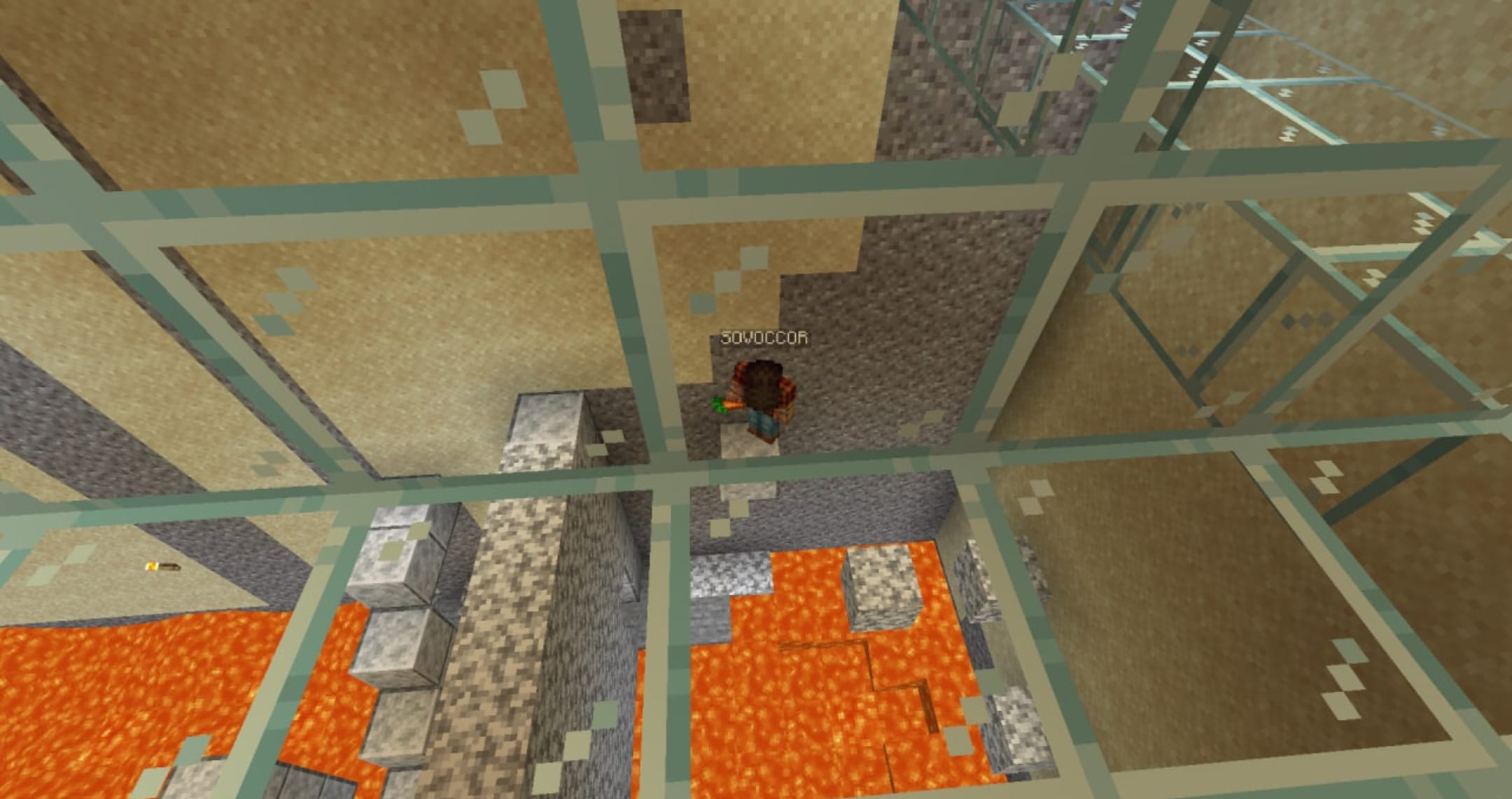 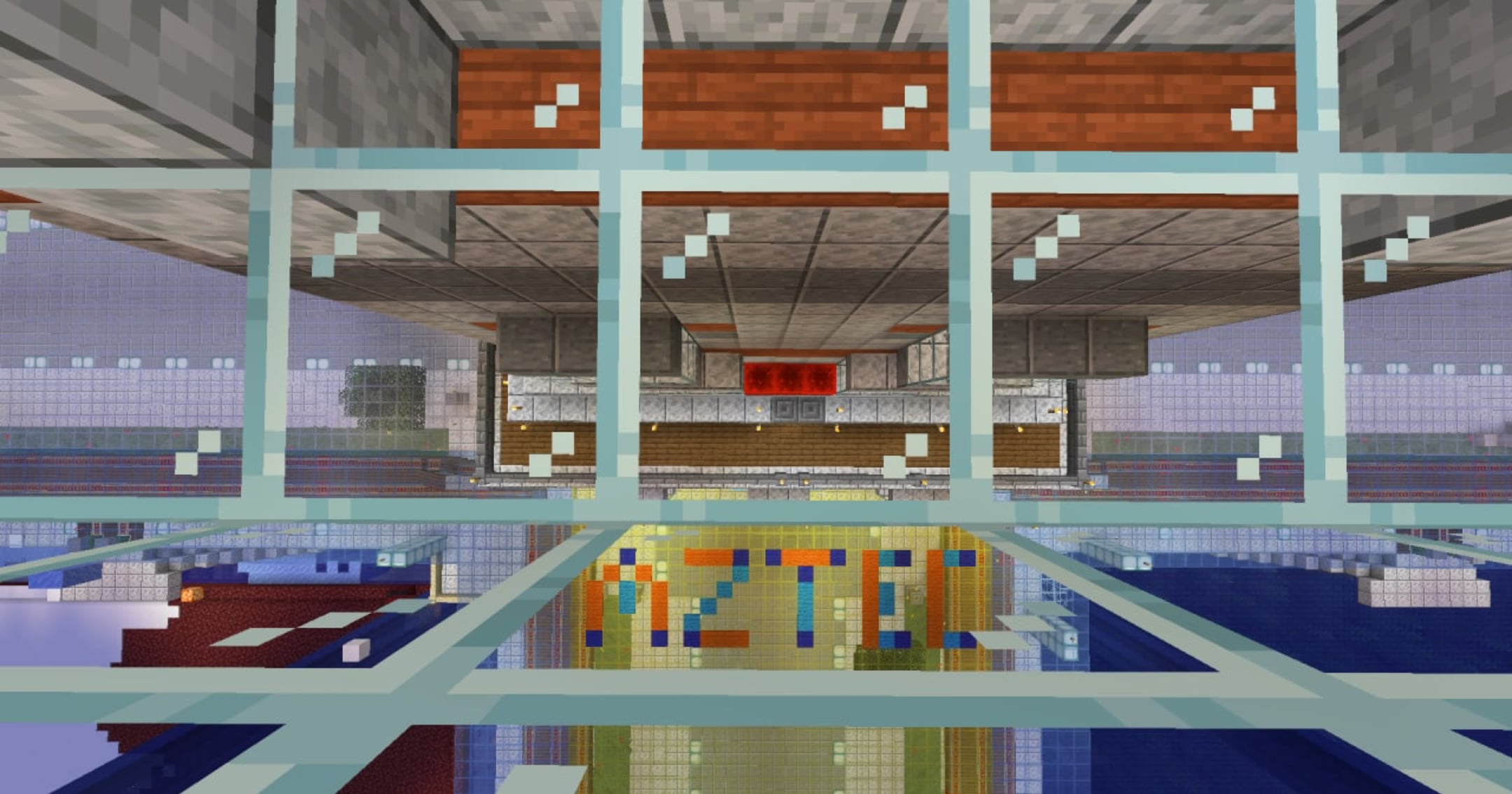 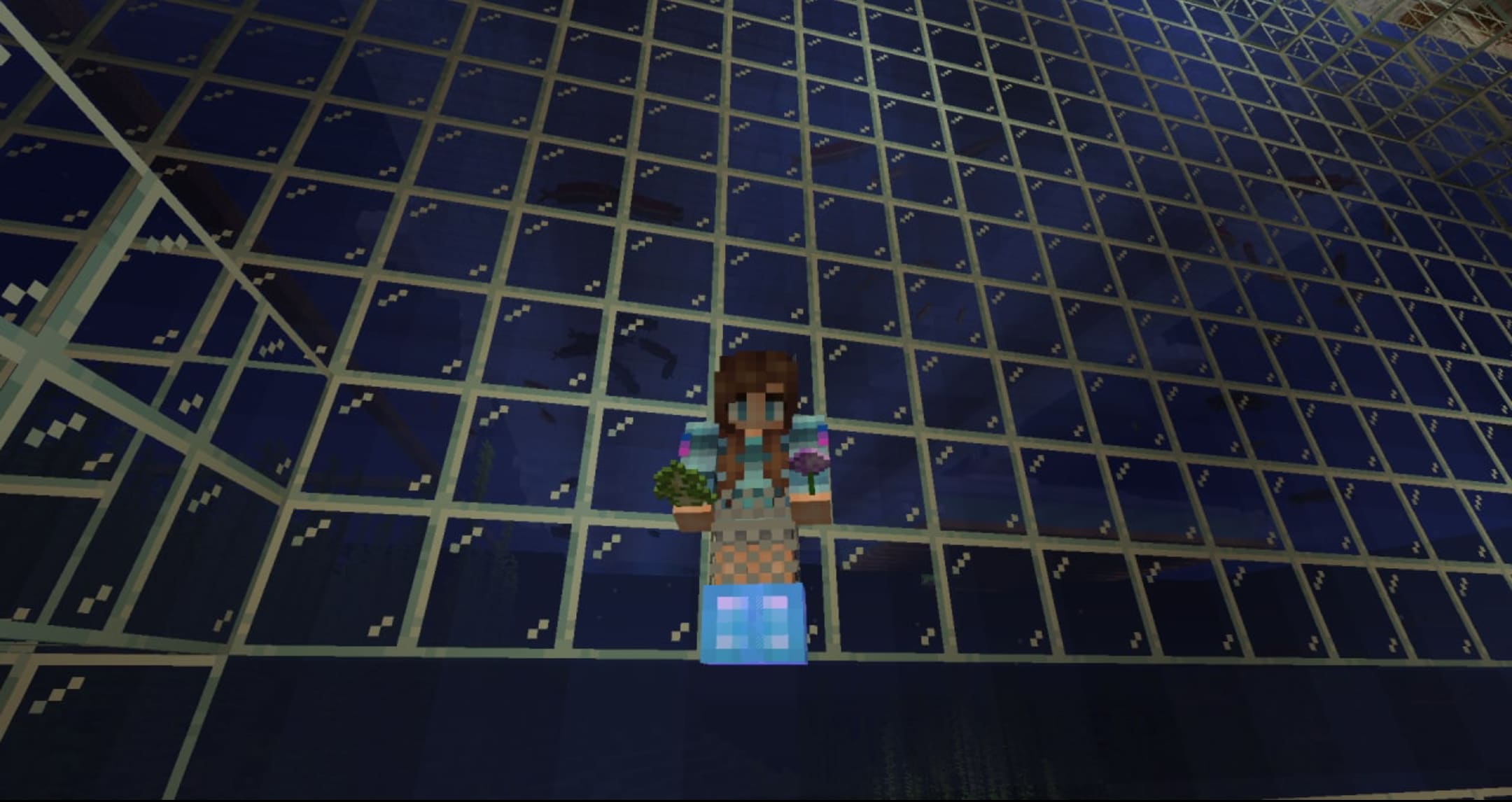