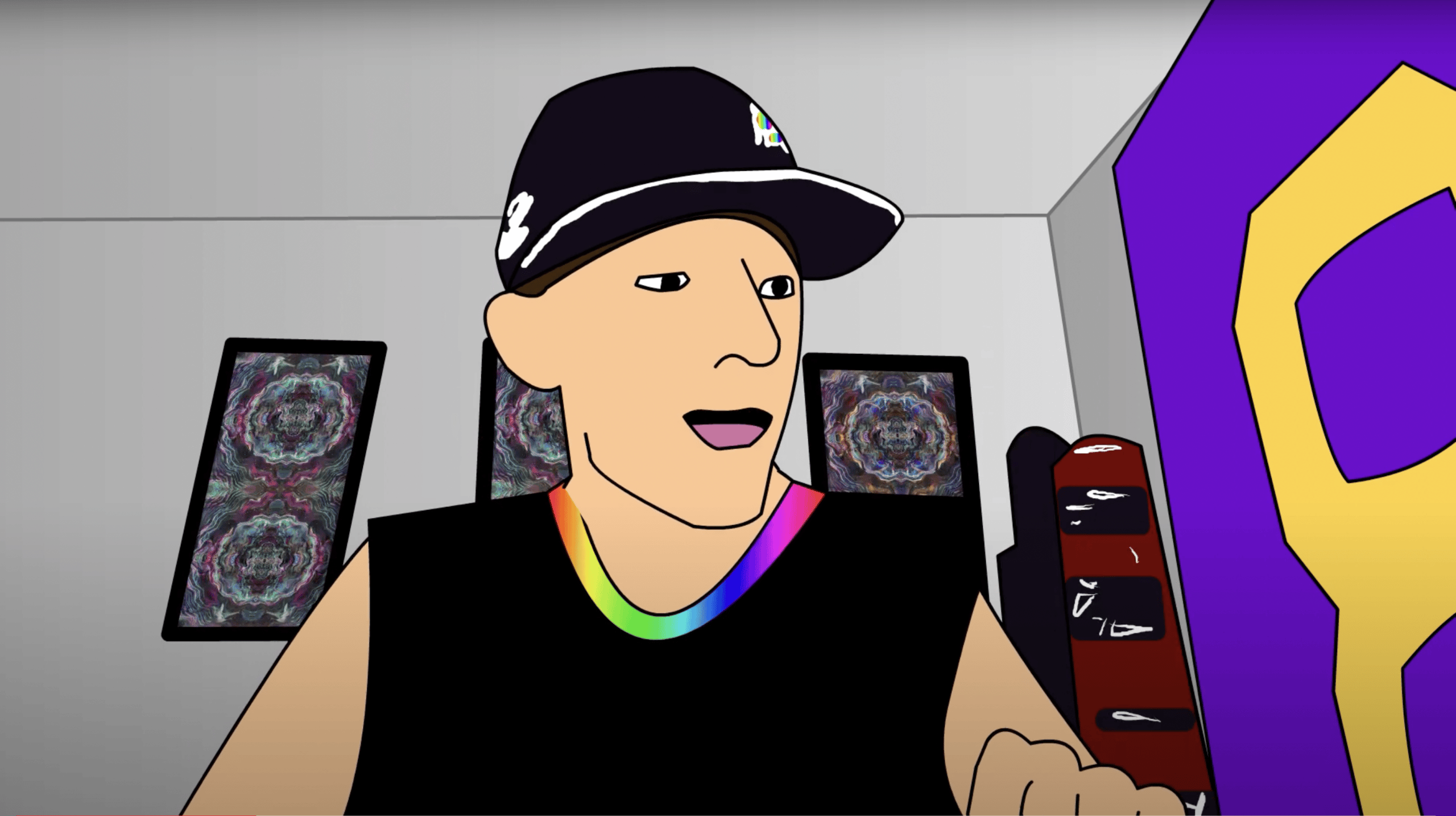 There are many creative geniuses with us over in the metaverse building and shaping this space in their image of all they do, one of which if you are not familiar with is Russ, aka ibelonghere.  From the early days a variety of unique artistic builds have been dotting The Uplift World landscape that perplex the mind in a variety of ways all good, for those Characterization of Interest by Russ truly do get the minds eye flowing with the possibility of the impossible when it comes to showcasing the profound notions hidden deep within the depths of one mans mind.  If you are lost in what this might represent, do make sure you click on that link above to get a taste of some incredible creations such as a gigantic water chainsaw held by a lumberjack filled with pigs, a Santa that sings, and a mammoth of an active volcano that you cannot even believe what lies beneath.  Add to that the multiple one offs like the The Ka’ah Quest Interactive Puzzle Gallery Adventure and the Animation Event it is impossible not to see that Russ in every sense of the words really does belong here as his alias suggests.

Follow the trajectory of the bread crumbs and you will eventually end at the bakery, one which in Russ’ case seems to be filled with the ability to bring about and concoct new ways to do things and engage those things that he is interested in learning the most. In this way in fact something new and fantastic has been born, and for those not paying attention we wanted to point the magnifying glass towards the rays of light cause honestly, this stuff is fire!!

For those who may not be plugged into the community gossip side of things, Miss Fuchsia is fast – like lightning so.  Word on the street is that during the many regular hotel quests put on by Mitzi that Miss Fuchsia is always in the top two contenders, and with this reputation many have wondered just how it came to be this way.  Lucky for us all, thanks to ibelonghere we now have the canon of her origins to refer to.

A challenge in the wait, Miss Fuchsia will surely be keen to hold on to the title and reputation that she has worked so hard to build and protect.  Do you think you have what it takes to take out the reigning champ?!? Well, do keep us posted if you happen to go head to head and come out in front of Miss Fuchsia during one of Mitzi’s or other Uplift World quests!

For those unfamiliar, TerraMike has appeared multiple times on The Uplifters Network to talk about things him and the Jumbie Art team are doing both within the metaverse and beyond.  This one however really couldn’t be more perfect for a simple animation cut to short feature.  Remember that old show ‘Kids Say the Darndest Things’!? Well, this clip right here taken from the May 4th, 2022 TerraMike UpLifters appearance might just be the foundational episode for a whole new genre premising ‘The Things UpLifters Say!?!’

Check out The Boardwalk @Exit 81 Genesis plot origins and plot revamp which coincided the release of Jumbie Art NFT’s for $BLU video walkthrough with TerraMike for more on all they have going on both in metaverse and beyond.

For those not in the know, Austin Linney is as bad ass as they come.  Having joined The UpLifters on multiple occasions for the Media Moguls series, Austin has now become one of our favorites both on and off the camera.

Serial entrepreneur, real estate investor, business and mindset coach, host of Construct Your Life and now Taking The Reigns podcasts, there is a way in which Austin lives his life that may not be common place among like business minded individuals, but it all factors into the ability to keep his mind and body in the best possible way through interaction with an environment calming him every single day.

As a random one off this may go completely under the radar, but on the May 4th, 2022 Media Moguls episode Austin just happened to be out and about with the ducks which really was too coincidental an opportunity to pass up playing a recent add to the streaming service music catalogue aptly named ‘Feeding the Ducks’.  We will leave the rest here for you to ponder, but just imagine where it might be that that little melody would best fit itself into the traditional media playbook.

Where We Belong From Here

Although only three videos in, it is abundantly clear.  These are a hit, even if it is only for the not 99.999% of people that are a fan of TheUplifters show, those in the know want more.  With Austin Linney already trying to commission ‘a whole cartoon series now‘, and Corey already thinking about ‘how much one of these per episode would cost us‘ this really does seem like the beginning of something that may just go down in Uplift underground history as one of the biggest haphazard fan favorites on the market.

I made videos for fun and because I'm learning how to make videos.
I don't know about pay.. land shards or miners maybe?
My plan was to make similar videos with people who are interviewed when something funny happens.
I was watching the Tiny Mrs B and Framed Games video today…

And to think all this came from the simple notion of just wanting to do something as a learning experience for fun.  Just imagine the potential of like minded people in a world all hanging out together and doing incredible things just for the heck of it — a world in which our minds, bodies, and souls are completely and without hesitation aware that at the baseline of everything we think, say, and create is the fundamental and foundational notion that ‘I belong here!’

Building Blocks of Inspirational Value is a series dedicated to the most amazing things done by exceptional members of our community.  More than just an amazing build or cool design, this feature series focuses on those and their perspectives that bring a higher order to both what we do here in the metaverse and the brother space to which we are enveloped in.  With a focus on value for the community at large, this series features those that through their efforts help to uplift us all.